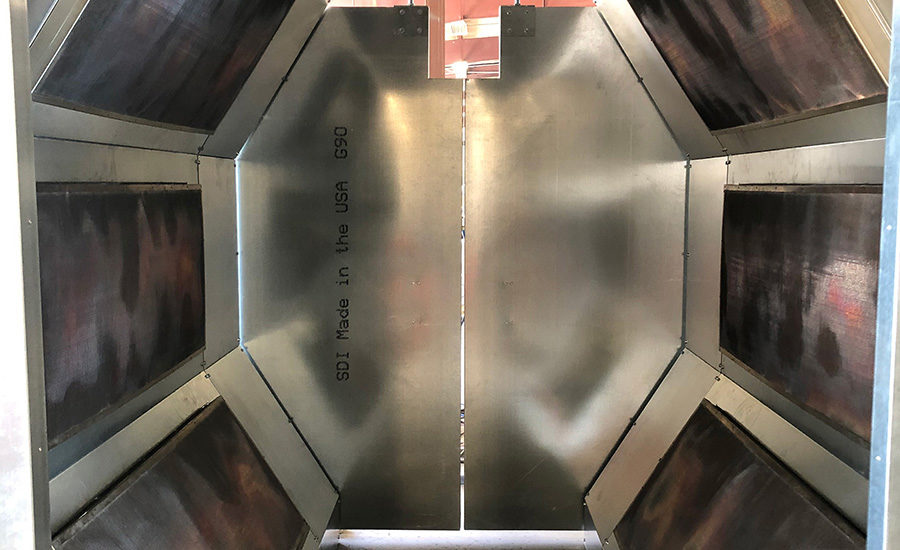 A retrofit project improves system performance and provides savings for one processing and powder coating line.

In November 2019, an Oklahoma-based manufacturer of mobile truck equipment and automotive pneumatic cylinders, controls and valves was looking to learn about the potential benefits of a gas catalytic oven for its application. The company produces a range of powder-coated parts such as 4″ tubular cylinders and 0.25″ diameter handles.

The company had an existing convection oven that had been patched up over the years to keep it going. It failed in early 2019. As a result of failure, the company was incurring an outside powder-coating expense in excess of $10,000 per month. In addition, the company was planning a move to a new location in 2021.

While company personnel had researched the benefits of gas catalytic oven systems, the team had never experienced it. But, they wanted to bring the powder-coating process back in-house as soon as possible — and certainly before the move. Any new system also would have to be moved to the new facility.

Prior to starting the design process, the parts manufacturer was invited to the infrared heating system maker’s testing facility. The testing was done for two purposes. First, because this was the part manufacturer’s first exposure to gas catalytic heaters, it would allow the team to see how gas catalytic infrared works firsthand. Second, it would allow the heater manufacturer’s engineering team to determine the optimal system size based on the part sizes and required process times.

The original convection oven system used mobile racks to hold the parts being powder coated. The convection curing process took 20 minutes per load. Depending on the parts, the number of items per load varied between 12 pieces for the larger parts to 50 pieces for the small handles. The powder chemistry required heating the parts above 140°F (60°C).

The testing process began with the heating system engineers attaching thermocouples at different points of the test pieces. (The sensors would remain on the parts during coating and curing to measure the temperatures the various parts reached.) The test pieces then were powder coated in the paint booth and moved into the test oven with an overhead conveyor. Infrared thermography images of the tested products were captured to evaluate and ensure a smooth temperature profile occurred over the entire test pieces.

Multiple trials were performed on each of the test piece shapes. Upon completion of the testing, it was determined that gas catalytic ovens cured the powder-coated pieces in 10 minutes — a 50 percent reduction in the cycle time.

Engineers at the heater manufacturer worked with the company to configure the mobile parts rack. Unlike convection systems, the gas catalytic oven required the parts to be loaded in a linear, single-row fashion. By rearranging the mobile parts-holding racks, the company was able to maintain the same number of parts per load. Furthermore, with the new, reduced cycle time of 10 minutes per load, it was determined that a shorter oven would be required. This allowed the powder-coating process to match the curing cycle time.

The proposed system for the convection oven retrofit included:

The proposed retrofit kit minimized the work required by the heating equipment manufacturer to minimize costs for the parts manufacturer. The heater racks were designed to fit within the existing oven structure. The fuel gas train was designed to take advantage of the existing fuel gas supply. Finally, the electrical control required would reuse the existing panel. Reusing as much of the existing components as possible helped to reduce the cost — and the project timeline.

Upon acceptance by the parts manufacturer, the retrofit system was built and shipped in four weeks. A team from the heating system manufacturer assisted in the installation. On-site, the retrofit heater racks easily slid into the frame of the convection system without requiring modification to the structure. The new fuel gas train was installed and piped to the existing supply line.

Phase 1 Project Results. From the initial meeting to the system being installed and fully operational, the project took a little more than eight weeks. The infrared heating system manufacturer worked with the parts manufacturer to define the process requirements, test and prove the process, and then designed, manufactured and commissioned the system. As a result, the automotive parts manufacturer was able to immediately bring the powder-coating process back in-house.

The initial stage of the project achieved all its originally defined goals:

Phase 2 Project Results. About six months after the retrofitted heating system was installed, the parts manufacturer completed its move to a new facility.

As the company started its relocation, the retrofit heater kits were shipped back to the heating systems maker to be retrofit once again into a new oven frame. The existing convection oven would not be moved to the new facility, so a new oven frame was required. The gas catalytic infrared heating system maker reused as many of the components from Phase 1 as was possible for the complete oven package.

The new system was designed and built to coincide with the facility move. The new oven reduced the floor space requirements by 50 percent, cut gas consumption by 50 percent and shortened the cycle time by 50 percent. The savings achieved upon completion of Phase 1 and the move to the new facility were more than the cost of the total project, meaning the payback of this project was achieved by the time Phase 2 was completed.

INTEK Corporation supplies both electric and gas catalytic infrared flat-panel emitters for retrofit or new installation projects just like the application in this article. Feel free to contact us with the details of your project, and a member of our sales staff will provide you with a free estimate and process heating analysis based on your specific requirements.