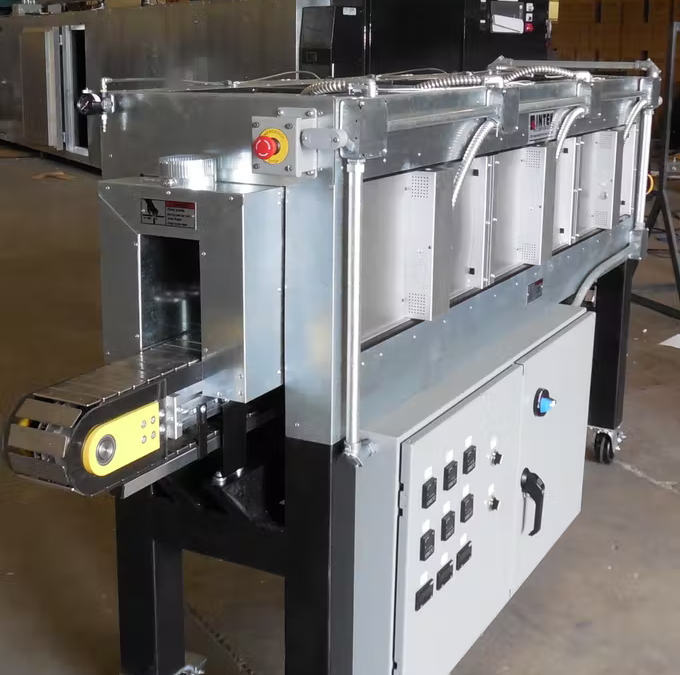 What Do You Need to Know About Industrial Ovens

In the aerospace industry, industrial ovens are a vital part in the process of parts manufacturing and refurbishing. Whether it’s annealing metal to strengthen the part and relieve stress, drying paint and curing composites, or part de-embrittlement to soften and rehabilitate components in maintenance and repair, asking the right questions can be the key to efficient, low cost operation of aerospace industrial ovens.

1. What do I need to know about industrial oven energy use?

For about 100 years, natural gas has been used to heat industrial ovens. Traditionally, air was put into a burner and blown to the other end of the oven with fans or blowers. The hot air surrounded the product whatever its size or shape, which was eventually heated to the average oven temperature. In general, industrial ovens can heat product up to about 1,000 F, with typical operating temperatures in the range of about 180 F, 450 F, and 500 F.

Gas with heated, circulated air, known as convection, is good for heating a whole oven fast and for heating irregularly shaped product, particularly in batches, since the air gets into its nooks and crannies. But much energy is lost via heating the entire oven, from heated air exiting the front or back of the oven, and from powering its fans or blowers. Even with modulating burners heating with gas is essentially an all-on or all-off process, which is inefficient since heating the entire oven is required for even small parts.

2. What’s the most efficient form of industrial oven heat?

While people assume gas powered industrial ovens cost less than electric, electric can actually be cheaper and more efficient. Today one of the most efficient ways to heat an industrial oven is with invisible electric, infrared energy, which does not require heating the entire oven, and has no fans, blowers, or moving parts so it is totally silent. Infrared energy occurs within the electromagnetic spectrum imparting heat when the product absorbs the light, which is invisible as it is below the visible light spectrum.

“Gas is like a fire breathing dragon; it gets hot right now but lacks the energy efficiency, finesse, and control of electric infrared,” says Jesse Stricker, president of Intek Corp., a Union, MO-based designer and manufacturer of industrial ovens, heaters, heating elements, process controls systems, and material handling equipment. “Electric infrared is particularly effective on exposed surfaces such as drying paint and curing composites, and for continuous, industrial inline heat process systems such as belt or monorail conveyors.”

Because of electric infrared’s energy efficiency, it has also been adopted for space heating applications. For instance, some of our electric infrared space heaters can run on only 700 watts, but provide the same usable heat as a 1500 watt conventional unit that uses a fan, blower, and heating coils. 700 watts is about half the required power of a standard hair dryer. Since the low wattage draws less current, plugging in multiple heaters is less likely to trip electrical circuit breakers, which is a common problem with less efficient heaters.

One of the easiest ways to reduce industrial oven energy requirements, focus heat, and optimize performance is with zoned, modular electric infrared heaters. Like Lego blocks, these electric infrared heater modules, typically in 12” x 24”, 12” x 36”, or 12” x 48” sizes, become structural members of the oven. Because some include integrated hangers, mounting brackets, and wire connections, they can be designed to work individually for small areas, ganged together for larger areas, and may be ceiling hung or wall mounted for effective heating.

The belt conveyor ovens or monorail conveyor ovens often used in aerospace can also provide another element of control. Individual heat zones can be provided with separate controls, enabling greater, more consistent heating of product on an automated, hands-free basis.

Read more: What Do You Need to Know About Industrial Ovens